It's Release Day for the paperback edition of my near-future novel, Division! So of course, I'm providing a link (Amazon -- B&N will follow) and a short blurb.

Here's the link. And here's the blurb (complete with third-person reference to yours truly):

Conjoined twins Gordon and Johnny have never let their condition keep them from living full and fulfilling lives. Now, new technology gives them a previously unimagined choice: to live in "normal," separate bodies. But who gets to choose? And what if one twin considers their conjoined life a blessing, not to be abandoned without a fight?

Division, like Wyle's earlier novels, uses original settings and situations to explore universal themes: the complexity and intensity of family relationships, the nature of individual identity, and the far-reaching effects of the choices we make.

At the moment (I don't know for how long), the paperback is available at a 10% discount.

Thanks for listening!. This is my fourth novel, and it's still exciting. :-)
Posted by Karen A Wyle at 8:56 AM No comments:

I'm guessing that the revived series Cosmos on Fox, and especially tonight's (March 16th) episode, has some folks scratching their heads, or even writhing in the throes of cognitive dissonance.

"This show touts the scientific method and the glories of science! Why, the latest episode even made a point of attacking Intelligent Design, using ID's pet example, the eye, for good measure! Isn't the Fox network made up of knuckle-dragging anti-science conservatives? What's going on here?!?"

Doing some more guessing, I'd wager that for many people, the assumption of Fox's anti-science attitude springs from the frequency with which they air the views of climate change skeptics (deemed climate change/global warming "deniers" by some of the zealous). If all climate change skeptics are either ignorant of or willfully ignoring well-settled science, then why would any network with any respect for science give them that much air time?

I'll toss out some hypotheses to explain how Fox can find room both for Cosmos and for these opponents of the allegedly settled predictions of anthropogenic, catastrophic global climate change.

(A)  Fox treats different branches of science differently. There's some corporate tie, some financial or personal interest, leading whoever runs Fox to make climate change an exception from either a balanced or a pro-science attitude.

(B) The exception isn't global climate change -- it's Cosmos. Someone owes someone a favor, or has some other lever, to make Fox hold its collective nose and air this pro-science program.

(C) Skepticism toward climate change is not, in fact, a sign of either ignorance or disdain for science, but rather, true science in action, with skeptics refusing to be stampeded or bullied into accepting a politically pervasive message. The facts are more complex, and/or point at least in part in a different direction.

I haven't examined (A) or (B). As my husband (aka The Hoosier Gadfly) would say, "I'll leave that as an exercise for the student." As the reader will probably have guessed, I currently incline toward Option (C). For some of the data that's led me in that direction, you can take a look at this post from 2010. (I'd suggest ignoring the comments, as they somehow veered off into areas utterly unrelated to anything on my blog ever.)

Meanwhile, I hope you're enjoying the reboot of Cosmos as much as I am.
Posted by Karen A Wyle at 11:09 PM 3 comments:

Coming attractions -- and a freebie in anticipation thereof

It looks like the paperback of my near-future novel Division will be available on Amazon on schedule -- which means March 20th. Whether it'll have all features (e.g. "Look Inside") by then isn't clear, but if not, they won't be far behind.

The paperback, if you buy it on Amazon, will come with a free Kindle version. But if you'd like to pick up the ebook for free, and then decide whether you want the paperback on your shelf, pop on over to Division's Smashwords page and use coupon code UP22R by March 19th.

Here's what the whole paperback cover looks like -- complete with some excerpts from early reviews (which you may be able to read here, if you have really good vision). 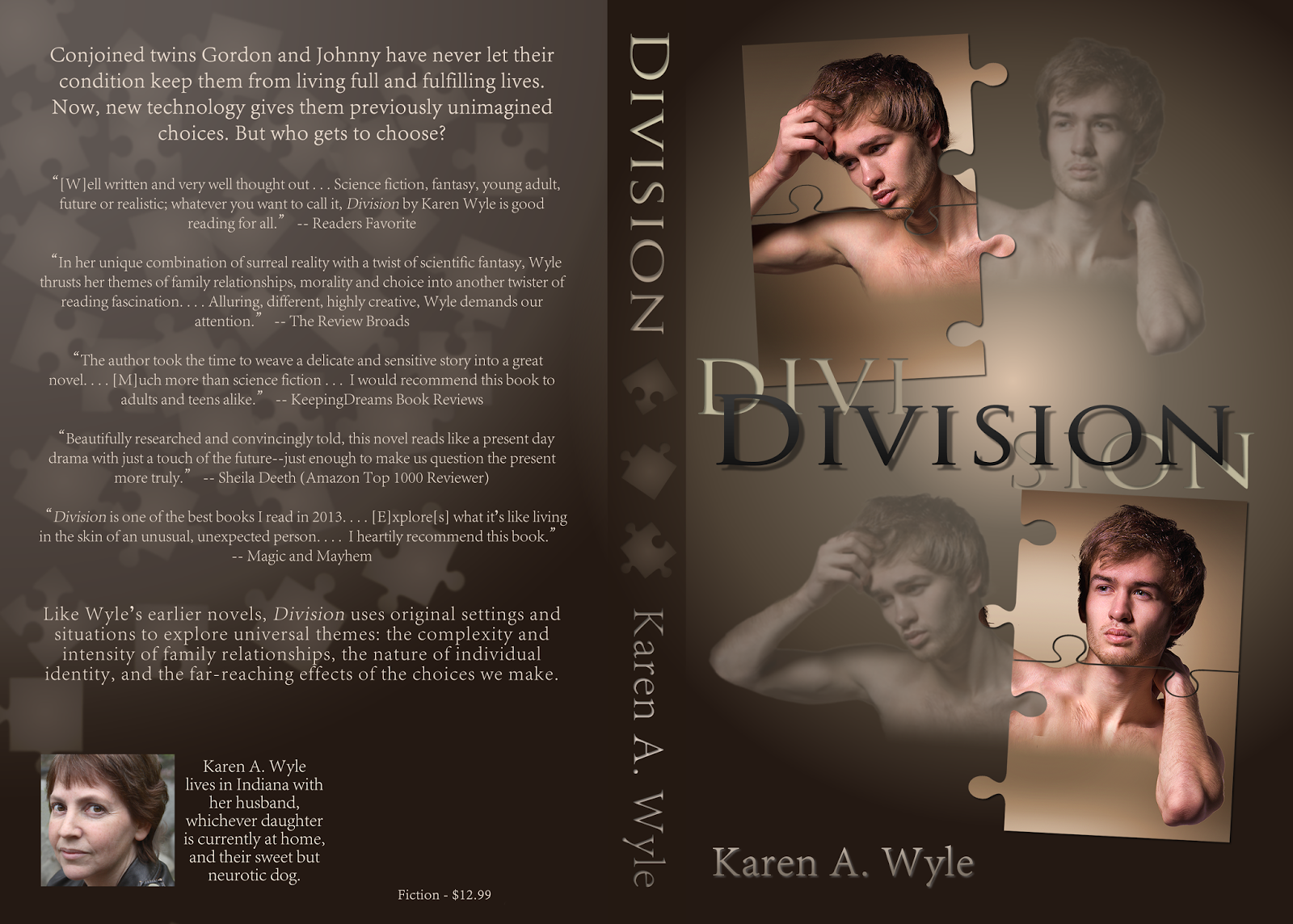