Book release! -- and the book's dedication

As promised, here's my It's Here! post about The Link, my fourth near-future and first YA novel. (I'm posting it a few hours early after an Internet connection scare.)

First, the back cover copy.

Kayla knows whatever her dog knows -- but neither knows enough.

The neural connection between Kayla and her dog seems unimportant, until her father's cryptic message.

Your mother and I are in danger, and I'm afraid that means you are too. I've gone into hiding. Don't try to find me unless I contact you, and don't let Saffi find me. You and Saffi should go too. Go and hide together.

Kayla doesn't really trust her father. After all, he left her mother and dragged Kayla off to live in the country. And when Kayla's mother gave her Saffi, her father somehow won the dog's loyalty.

But Kayla can't reach her mother. She has to decide, on her own, what to do. Should she hide in the forest with Saffi? Should she try to find her father? And what danger threatens?

I posted the cover yesterday, but I'm quite fond of it, so here it is again. 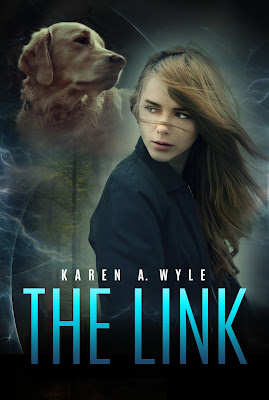 You can find two excerpts from The Link via links in yesterday's post on this blog.

This book arose directly from my dog-walking duties. I'm usually the one walking our dog, a "Heinz 57" mutt. Here's a photo of her. 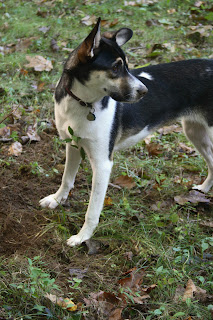 Of course, she sniffs one spot after another after another. And of course, I have no idea what she's learning from all those sniffs. At some point, I wished I could see a digital readout of what she's smelling, floating in the air above her. Well, that isn't exactly what happens in my book, but the idea inspired the technology involved.

Finally, I wanted to address the dedication and the publication date, which are related.

I published several earlier books on my older daughter's birthday, October 15th, in recognition of the fact that her participation in National Novel Writing Month led to my finally writing a novel, some decades after I gave up on that ambition. I decided to release this book on October 30th, my late father's birthday. The book isn't autobiographical, and my amazing father (about whom I posted yesterday) isn't much like my protagonist Kayla's father; but he's a father, and he made me think about mine. This is my dad's first birthday since he died last April, and I wanted to mark the occasion and to honor him. So the book is coming out on his birthday and is dedicated to him as well.

I love you, Charley Wyle.

You can find the ebook on Amazon, iTunes, Google Play, and eventually at other retailers including Kobo and the Nook Store. The paperback is on Amazon and Barnes & Noble (where, as of 10-29-17, it was marked down quite a bit!).

About my dad, who would have been 95 tomorrow

I thought I'd blogged about my father before, but I can't find any such post. So I'm posting what I said at his memorial last April.

--------
All of you know that my dad was a remarkable man. And for a little guy, he leaves an enormous hole.

The difference between his physical size and the size of his impact on those around him can be illustrated by what happened when he started to cut back on his workaholic schedule, before the illness that forced him to retire at age 80. Ismeca, the Swiss company for which he was a consultant, started looking for someone to perform some of the many tasks they’d been relying on Dad to perform. They said they were looking for a “little Charley.”
My dad’s combination of intelligence, resourcefulness, courage, and self-discipline made him particularly good in a crisis. Some crises required more of one quality, some more of another. One that required his courage and self-discipline occurred when he was in Basic Training in the Army. They were camping in or near Death Valley, with sleeping bags in the desert – no tents. He awoke quite a while before reveille one morning to discover that a rattlesnake had cuddled up to him for warmth during the night. He knew that if he moved in a way that startled the snake, he might get bitten. So he lay motionless for two hours until someone noticed that Carl Weihrauch was late getting up.
I remember another crisis that called on different qualities. Many of you know that my brother David had serious psychiatric problems at times. One day when David was living on his own in Berkeley, he called my folks in L.A., or they called him, and it quickly became clear that something was seriously wrong, that he had suffered a psychotic break. Calmly and casually, without missing a beat, Dad said, “You know, I’m going to be in Berkeley this afternoon. Should I stop by?” Then he flew north and got David the psychiatric care he needed.
Another of Dad’s defining qualities was his special brand of determined optimism. He used to tell an anecdote about a man who somehow offended a king and was sentenced to death for it. The man, apparently glib of tongue, managed to convince the king that if he were only spared, he could teach the king’s horse to talk. The king postponed the sentence for a year to allow for these lessons. Afterward, a friend asked the man what good this postponement would do. The man replied: “A year is a long time! Anything can happen in a year. I may die; or the king may die; or the horse may talk!” Another example: one of Dad’s favorite books was the children’s picture book Ferdinand. Ferdinand was a bull who had no interest in fighting and just liked to sit and smell the flowers. When he sat on a bee, his reaction appeared so ferocious that he was chosen for a major bullfight. When he arrived in the ring, surrounded by finely dressed ladies with flowers in their hair, he sat down and smelled, refusing all efforts to make them home. In the improbable conclusion my father loved,
“they had to take Ferdinand home.
And for all I know he is sitting there still, under his favorite
cork tree, smelling the flowers just quietly.”
I could go on for far too long telling Charley stories, from his boyhood in Berlin to his Army days during the invasion of Europe to his business career to his many years of political involvement. You’ll hear a few of those stories from others.
Dad changed over the years, of course, in obvious and unimportant ways. He stopped dancing the kazatska. His vision, never great, got worse. And instead of striding along briskly, arms swinging, head tilted a little to one side, he moved slowly, bent over, with a cane. But he never lost his sense of humor, his generosity, his commitment to civil liberties and social justice, his good cheer, or his indomitable spirit.
I count myself as exceptionally fortunate to have had this stalwart, honest, forthright, moral, modest, bright, funny, loving man as a parent and role model – and to have had him, not long enough, but for so long.
Posted by Karen A Wyle at 7:00 PM 1 comment:

Did I somehow miss posting a cover reveal for tomorrow's book release?

Well, let me remedy that omission forthwith! Here is the cover of the near-future YA novel coming out on Monday, October 30th. 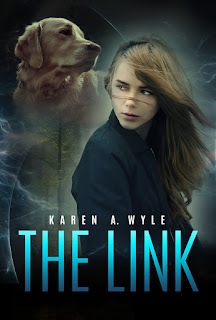 Cover designer David Leek and I collaborated on the cover, but the principal design work was all his.

Expect another post tomorrow, including the back cover copy and how the book came to exist (hint: I'm the one who walks our dog).
Posted by Karen A Wyle at 1:53 PM No comments: