Whodathunkit: in the context of the ineptness of the Obama administration -- junking the planned Eastern European missile installations, without prior notice to Poland, on the anniversary of the Soviet's invasion of that country -- Vice President Biden looks like a skilled statesman.
Posted by Karen A Wyle at 11:01 AM No comments:

Since Senator Evan Bayh is one of my senators, I keep sending him messages about Obamacare and its siblings. I dunno how often is too often -- I hope my emails aren't being automatically roundfiled. Anyhow, here's the latest. The subject line was "impact of medical device tax -- another unintended consequence".

One of Bloomington, IN’s premier companies, Cook Medical, would take a serious financial hit from the proposed health care “reform” legislation. The 4% tax on medical devices would threaten a company that provides your constituents not only with thousands of good jobs, but with the pride of hosting a company whose products improve medical care worldwide. Other medical device companies face similar damage. There’s an irony – health care “reform” that undermines health-enhancing technology. This is just one of the unintended consequences that would flow from ill-considered, patched-together, politically driven legislation.

You are in a position to hit the brakes. Please do so, for the good of your constituents and your country. Give us a chance to accomplish real health care reform with the appropriate care, thoroughness, and bipartisan creativity.
Posted by Karen A Wyle at 10:59 AM No comments: 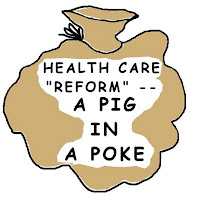 Well, I just made my first Facebook Flair, and there it is. I'm going to do my feeble best to get this meme out there in the blogosphere....
If I can get my talented artist daughter to do a cartoon, I'll focus in particular on what a Conference Committee would turn out.
Although "Frankenstein" would be as good a label as "pig in a poke" for what would probably result....