Since I need a link for the Division ebook cover...

I'm going to be bold, once again, and submit a cover to The Book Designer's "e-Book Cover Design Awards" -- so I need a link with a suitably sized image of the cover in question.

For some reason, the color shifts depending on the size of the image, in my preview browser. FWIW, the skin tones should not be particularly bronze.
Posted by Karen A Wyle at 5:51 PM No comments:

What the heck is author Sue Ann Jaffarian doing?

Since I stumbled on Sue Ann Jaffarian's mysteries, I've been scarfing up every one I can get my hands on. I think she has three series going, but I've only read the books in two of them:

--the "Granny Apple" series, about a woman (Emma Whitecastle) who can see and hear ghosts, including the ghost of one female ancestor (Granny Apples), who assists Emma in solving the problems that keep various ghosts from "crossing over";

--the Odelia Grey mysteries, about a plus-size paralegal who keeps finding herself in mystery-type situations, and can't seem to sit back and let other people handle them.

I read mysteries, when I do, more for the characters than the plot. I enjoy the main and subsidiary characters in both of these series, as well as Jaffarian's writing style. But I'm increasingly puzzled and somewhat irked by what Jaffarian is doing with the Odelia Grey stories.

Starting with perhaps the second or third book, characters keep confronting Odelia, more and more frequently and critically, with the fact that somehow, she just keeps stumbling on dead bodies! Her boyfriend, at one point, calls her a "corpse magnet." The obsession of almost every recurring character with this idea is playing a larger role with each successive book.

Of course, the reason Odelia keeps finding dead bodies is that she is -- ta-da! -- the protagonist in an amateur-detective mystery series. There's really no way around this (sorry) stumbling block. The more usual way of dealing with this element of the sub-genre is to ignore it -- which has never particularly troubled me as a reader. Am I unusual in this respect?

In Twice as Dead, the sixth book in the series, Odelia's friend Zee practically spills the beans, saying to Odelia, "It's just  . . . well, it's just that sometimes I wonder if somehow, some way, something unseen has chosen you to find these bodies." Yup, that's about right. If this had been the loudest note of the theme, an ironic wink toward the audience, and the characters had thereafter stopped harping on the subject, that would have worked. Or Jaffarian could have gone all the way into the meta level, and had Odelia regularly remonstrating with the author who was dropping unwelcome corpses in her path. Instead, we have poor Odelia constantly castigated by loved ones, friends and acquaintances for one of the foundational elements of her existence. I can only speak for myself, not having investigated how others react, but it distracts me and pulls me out of the story.

I've been wondering why Jaffarian takes this tack, and have come up with only one hypothesis. Perhaps Jaffarian finds the implausibility of the amateur-detective premise increasingly hard to swallow, and would rather be working on one of the other series -- but her agent or publisher insists that she keep cranking out Odelia Grey novels. The chorus of characters could be chanting Jaffarian's own complaint. Consciously or unconsciously, she could be declaring, or trying to ensure, that the assumptions underlying this series are untenable.

The "Granny Apple" series has no such difficulty. Naturally, a woman who can communicate with ghosts will be the one to receive their requests for assistance. The only improbability is the ability itself, and that's a familiar enough literary trope. Emma Whitecastle does have a fair number of scoffers and skeptics to deal with -- but unless they, in turn, start to drown out all other elements of the stories, Emma and Granny Apples should be able to keep solving mysteries for some time to come.
Posted by Karen A Wyle at 5:15 PM No comments:

Yup, it's a holiday reminder of my books that you could give someone....

I haven't done a lot of posts, Tweets, etc. pushing my books this holiday season, but I figured I should do at least one. So here 'tis.

I have four novels available as ebooks (two only on Amazon, two all over the place) and three as paperbacks.

My series-in-the-making started with Twin-Bred, which springs from the question: can interspecies diplomacy begin in the womb? After seventy years on Tofarn, the human colonists still know almost nothing about the native Tofa. Misunderstandings breed conflict, and the conflicts are escalating. Scientist Mara Cadell’s radical proposal: that host mothers carry fraternal twins, one human and one Tofa, who might understand each other better. But both the human and Tofa communities have their own agendas for Mara's project. Will the Twin-Bred bring peace, war, or something else entirely?

Twin-Bred eventually acquired a sequel, Reach: a Twin-Bred novel. Mara and the Twin-Bred she helped to create embark on a new and perilous journey -- except for one pair who remain on Tofarn, attempting to live in the human and Tofa communities. Meanwhile, events on Tofarn approach a crisis, in which former host mothers Laura and Veda are deeply involved. 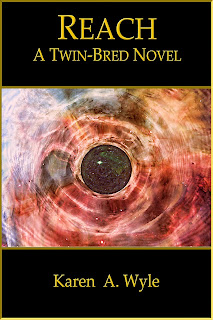 My one departure from science fiction, so far, is Wander Home, a family drama with mystery and romance elements set in a re-imagined afterlife. The tag line: Death is what you make it . . . . Driven by the compulsion to wander, Eleanor left her beloved daughter Cassidy in her family's care -- but Cassidy and the others died before Eleanor could find her way home. Now Eleanor and her family are reunited in an afterlife well suited to confronting unfinished business. But the restlessness that shaped Eleanor's life still haunts her in death. Somehow, she must solve the mystery of her life -- or none of them will be at peace. 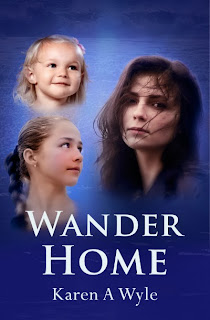 Finally, there's my near-future novel Division, intended for general audiences as well as science fiction readers. It's only available as an ebook, so far, but the paperback is due out next spring (March 20, 2014).

New technology, new choices . . . but who gets to choose? Conjoined twins Gordon and Johnny have never let their condition keep them from living full and fulfilling lives. Gordon looks forward to many years of closeness and cooperation. Johnny, however, faces their future with increasing restlessness, even dread.
When the boys are in their teens, the new technologies of accelerated human cloning and brain transplants are combined into a single medical procedure. Someone whose body has suffered such extensive damage as to make normal life impossible may -- with court approval -- be cloned and then given a brain transplant into the clone body. With Gordon's unwitting assistance, Johnny realizes that this procedure provides the chance he had never dared to hope for -- the chance to live in a "normal," separate body.But Gordon considers their conjoined life a blessing, rather than a curse. He has no intention of accepting separation -- not without a fight . . . .

You can find various purchase links for all these novels on my website.

I'm somewhat skeptical about most readers' willingness to use Smashwords coupons, given that one has to take the extra step of loading the book onto one's device of choice -- but nonetheless, I've made a coupon for my latest ebook, the near-future novel Division. With coupon code JA93J, you can pick the book up on Monday for $2.00 instead of $3.99, at this link. Various ebook formats are available.

And here's the blurb (complete with third-person reference to Your Humble Blogger):

New technology, new choices . . . but who gets to choose?Conjoined twins Gordon and Johnny have never let their condition keep them from living full and fulfilling lives. Gordon looks forward to many years of closeness and cooperation. Johnny, however, faces their future with increasing restlessness, even dread.When the boys are in their teens, the new technologies of accelerated human cloning and brain transplants are combined into a single medical procedure. Someone whose body has suffered such extensive damage as to make normal life impossible may -- with court approval -- be cloned and then given a brain transplant into the clone body. With Gordon's unwitting assistance, Johnny realizes that this procedure provides the chance he had never dared to hope for -- the chance to live in a "normal," separate body.But Gordon considers their conjoined life a blessing, rather than a curse. He has no intention of accepting separation -- not without a fight . . . .Division, like Wyle's earlier novels, uses original settings and situations to explore universal themes: the complexity and intensity of family relationships, the nature of individual identity, and the far-reaching effects of the choices we make.

There aren't many reviews on Smashwords, so you can head over to Amazon and read some. (Heck, you can even buy the book there, for $3.99, if you use a Kindle device or app, and prefer the convenience to the price break.)