Yesterday, I published my free (on Smashwords and my website) short story, "The Library," set in the same afterlife as my novel Wander Home. I built the cover around a beautiful photograph by "Robert S." (found on Shutterstock), and like the result well enough to enter it in The Book Designer's cover contest. But I need a URL for the cover -- so here it is: 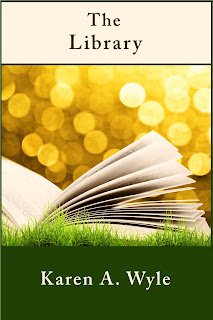 How to Send a Message (That We're Pushovers)

Let's see: how can we send a message to the new leader of North Korea, Kim Jong Un, who longs to show the world that he's really, really tough and important, about whether he should go beyond saber-rattling and attack U.S. interests?

Hmmmm. Maybe we can announce far and wide that our defense workers aren't important enough for us to pay them five days a week.

That should do the trick!
Posted by Karen A Wyle at 9:33 AM 1 comment:

A Thought Experiment re State Nullification of Congressional Action

Quite a few people are pushing the idea that states may and should "nullify" -- refuse to cooperate with, or resist as necessary -- unconstitutional federal statutes. Many of these people nominate Obamacare as a current example. Often, the response is that nullification violates the U.S. Constitution.

You can drop by The Hoosier Gadfly's recent post on this subject -- if you have time for a thorough exposition. If not, here's a short summary: Thomas Jefferson and James Madison believed otherwise, based on (in part) the reasoning that the federal government -- no matter which branch -- can't be the sole judge of the constitutionality of its own actions. Also, Article VI requires all state officials to swear or affirm to support the Constitution. If your response is that this means to follow the U.S. Supreme Court's interpretation of said Constitution, see the previous point -- and also, the following thought experiment.

The constitutional provision that establishes the U.S. Supreme Court and gives Congress the power to set up lower federal courts -- Article III -- also says, explicitly, that the Supreme Court has appellate jurisdiction (the power to review) "with such Exceptions, and under such Regulations as the Congress shall make." No amendment to the Constitution has monkeyed with this language. What this means is that Congress has the power to insulate its own statutes from Supreme Court scrutiny. If I correctly read Andrew Gold's article on how the Court has interpreted this clause, the Court has not entirely accepted that Congress may retroactively remove the Court's power to review previously passed statutes -- but otherwise does acknowledge that power, and further, that Congress' motives in taking such action are essentially irrelevant. (By the way, there's considerably less textual basis for the Supreme Court's power to invalidate any Congressional action, a power which was not universally conceded prior to the 1803 case of Marbury v. Madison.

So: let's postulate that Congress passes legislation providing that anyone insulting the President has committed the crime of undermining the stability of the government (Alien and Sedition Acts redux, more or less), and must be arrested by state police and thrown in the state hoosegow. Not only does this blatantly violate the First Amendment, but it's federal mandate enlisting state officials without requiring their consent, which would appear to violate U.S. Supreme Court precedent. However, Congress cleverly includes in this legislation a provision prospectively eliminating the Supreme Court's jurisdiction to review cases arising from the new statute. So the Supremes will not be riding to the rescue.

Under these circumstances, is the First Amendment dead, and the citizenry helpless? Or could the states refuse to perform their new and unconstitutional duties?

If so:
(a) That's nullification, folks.
(b) Where is the textual basis for confining this state power to the circumstances I've described?

(Bar examiners, feel free to borrow this hypothetical for use in bar exams.)
Posted by Karen A Wyle at 12:32 PM 1 comment:

As I neared the end of Danusha Goska's Save Send Delete, I started pondering what rating to assign it. I thought I would give it four stars, but when I finished the last page and my Kindle prompted me for a rating, I found myself giving it five. This is not a perfect book, and if five stars imply perfection, I apologize -- but it is a fascinating, moving, and profoundly thought-provoking work, and I was quite reluctant to admit it was over. (I am now rereading a book I could recite in my sleep, as a transition to moving on.)

If I understood the Preface correctly, Save Send Delete is a lightly fictionalized memoir, an account of an email exchange that became a virtual relationship between a woman and a man. The woman: Mira, a Polish-American Catholic, widely traveled, a PhD and teacher with serious health problems that have wreaked havoc with her personal and professional life. The man: (short for a long name-plus-title), a well-off British aristocrat, author and raconteur, known for consistently defending atheism as superior to any form of religion.

The title reflects the form of the narrative. We see Mina's emails to , as well as the emails she doesn't send (deletes) and those about which she vacillates before sending (saves). We are left to infer the content and style of 's replies. We are also shown exchanges between Mina and a friend, Amanda, about whom there is more to say -- which I'll refrain from saying.

Mira's and Rand's correspondence focuses on the subjects of religion and what one could call supernatural experience, but through that lens, it examines a wide range of subjects: suffering, love, hate, friendship, and how one can and cannot help one's fellows, to name a few.

Among the insights to which this book led me, by what indirect route I cannot recall: while I am an agnostic, and find all established religions unconvincing, I could not have written my novel Wander Home, set in a rather enticing afterlife, if I were absolutely convinced that no such afterlife could possibly exist.

So why do I call the book imperfect? At times, I felt that Mina ran on longer than necessary, or repeated herself in ways I could do without. These were minor and transitory annoyances, and they do not prevent me from heartily recommending this book.